Our guide is the result of many months spent traveling, far and wide for Spain, a region that we love in many ways. We come back often and for us it is the ideal destination for all those who live or stay in motorhome for long periods of the year. In autumn and winter the particularly mild climate of the southern coast of Spain and the almost total absence of rains allow to experience at the best the plein-air with motorhomes and vans. 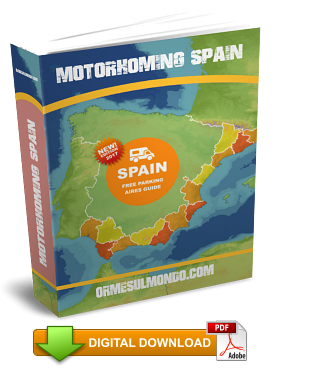 WARNING ! This is not the usual, classic guide of the Aires and Campsites. If you are a  accustomed to comfort and a certain standard of living, if you worry about living on the road or if your needs require stopping at starred campsites, well then this guide is not for you !

Our ebook will allow you to enjoy your holidays in Spain, for short or long periods, with a new perspective. In this guide you will find, minutely reported, over 170 GPS POI’s related to free parking aires and facilities points as well as 51 detailed and mostly unpublished photo cards.

Of course we have also reported some Aires with payment  (only those with excellent quality / price ratio) mainly in places poorly served and where it is not possible to make water supply ( sometimes happens) But mainly we wanted to tell you how it is possible to live for long periods of the year in absolute FREE PARK without any difficulty.

CATALOGNA: the province of GIRONA 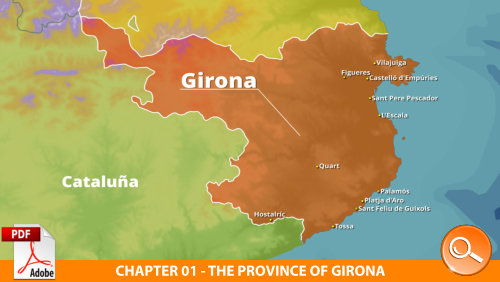 The province of Girona is the first we meet, one of the four provinces of the autonomous community of Catalonia, in northeastern Spain. The Costa Brava is the northernmost coastal stretch of Catalonia and starts from the town of Portbou, winding about 130 kilometers to Blanes.

It is an extremely lively coast, whose relief is exacerbated by a series of mountainous systems that fall to the sea with rocky cliffs that give it a truly inhospitable and wild aspect ( hence the origin of the name ), with inlets and hidden beaches between rocky ledges where the pines almost reach the sea. There are numerous interesting places we met along the way, some very popular in winter by fulltimers from all over Europe: Platja d’Aro and Sant Feliu de Guixols in particular. Discover the itinerary and the stops recommended in our guide !

CATALOGNA: the province of BARCELLONA The coast overlooks the Mediterranean Sea. The capital of the homonymous province is Barcelona. Numerous and interesting are the locations we have “discovered” for you, where you can stay in “free parking”. In our guide the complete itinerary along the coast with some short detour within the province

CATALOGNA: the province of TARRAGONA 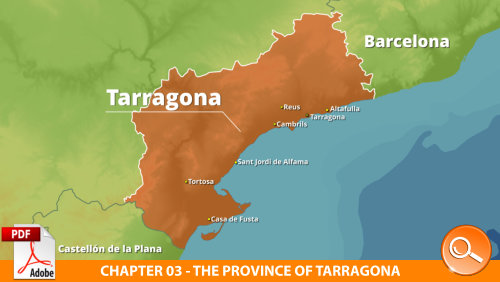 Tarragona is a province of the autonomous community of Catalonia, in northeastern Spain. It borders the Valencian Community ( province of Castellón ) to the south-west, with Aragon ( provinces of Teruel and Zaragoza ) to the west, with the provinces of Lleida to the north and Barcelona to the north-east and with the Mediterranean Sea to the south-est, at the delta of the river Ebro.

River, sea, bays, beaches, dunes, salt lakes, forests, shelters, coastal lagoons, fluvial islands make up a natural landscape that, with its rice fields, is home to a very diverse fauna. Of note the important aquatic habitat, thanks to the rich vegetation of the Ebro Delta is extremely populous, with more than 700 species listed.

COMUNIDAD VALENCIANA: the province of CASTELLON 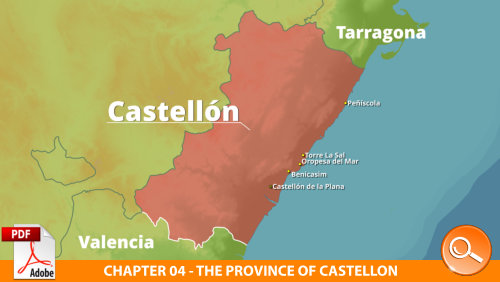 We officially entered the Valencian Region which extends along the Spanish Mediterranean coast. This is a welcoming and sunny area, inhabited by open and active people. Castellón is one of the three provinces of the Comunidad Valenciana, located in eastern Spain. It borders the province of Valencia to the south and Catalonia to the northeast.

Its capital is Castellón de la Plana. The province of Castellón is renowned for the production of ceramics. In the province of Castellón you can go from the sea to the high mountains in a few kilometers; classic seaside tourism ( Benicasim, Oropesa del Mar, Vinaroz, Burriana, Peñíscola, Benicarló, etc. ) is complemented by a thriving local tourism, thanks to the monumentality of countries such as La Jana, Morella, San Mateo, Segorbe, at the spas in Montanejos, Benasal, Catì, at the sources of the Palancia river and a wide network of paths and hermitages.

COMUNIDAD VALENCIANA: the province of VALENCIA 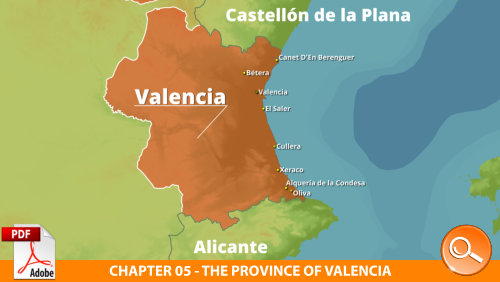 The capital is Valencia, the third largest city in Spain by population, after Madrid and Barcelona. Other important centers are Torrent and Gandía. This province is very popular with fulltimers from all over Europe due to the particularly mild climate and the excellent possibilities for free parking. We will talk about it in this chapter, in the pages of our guide…

COMUNIDAD VALENCIANA: the province of ALICANTE

The province of Alicante includes almost all the coastal stretch of the Costa Blanca, which extends from Dénia, to the north to Pilar de la Horadada, in the south. Here a succession of beaches and bays, of cliffs and inlets, offers us the most varied landscape with an always ideal climate. Winters are mild and sunny. The rare cloudy days and a blue that makes this sky unique are an invitation to lead a simple life, contemplate the sea, go for walks and excursions. Less hectic than the Costa del Sol and with warmer winters than the Costa Brava this is an ideal destination for wintering in motorhome or van !

MURCIA: the province of MURCIA 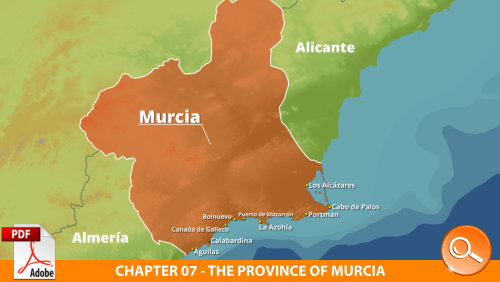 Apart from the peninsula of “La Manga”, this region is one of the least visited in Spain, but no less interesting. In the southern part of the Costa Calida, near the Gulf of Mazarrón there are numerous beaches and delightful coves.

The Costa Calida owes its name to the very high temperatures in summer and to the sunny days that shines here almost all year round with seasonal averages of 18°. A true paradise for fulltimers who come here numerous from half of Europe. The torrid summer climate, sunny all year round has shaped a semi-desert and arid territory within and near the coast. In this region you will find long beaches and small coves, and many leisure, sport and wellness offers.

One of the most beautiful areas is La Manga del Mar Menor, an ideal destination to relax and enjoy the sea. In addition, you can visit vast white beaches, such as those of San Pedro del Pinatar, almost untouched coves like those of Cartagena, landscapes as curious as the erosion of Mazarrón or fishing resorts such as Águilas. Many beaches are also considered true outdoor Spa, for the hypersaline waters of the Mar Menor and its muds and in the region there are also important Spa treatment facilities

ANDALUSIA: the province of ALMERIA 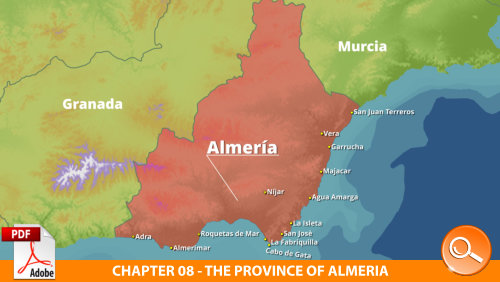 Almería is the first Spanish municipality overlooking the Mediterranean that we met coming from the north-west coast of Spain. It is located in the autonomous community of Andalusia. Surrounded by a circle of sierras overlooking the sea, is an important commercial port, one of the main Spanish Mediterranean after Barcelona, ​​which serves for the export of iron ore from the mines of Sierre and the renowned table grapes grown inland. In the Almeria desert, many movies have been shot during the golden age of italian “spaghetti-western”, as well as the classics by Sergio Leone with Clint Eastwood. Even Spielberg and Lucas for his Star Wars have filmed in these fascinating places

ANDALUSIA: the province of GRANADA 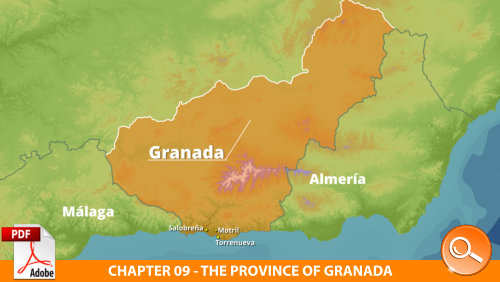 Granada is a small province of the autonomous community of Andalusia, in southern Spain. It borders the provinces of Malaga to the west, with the province of Almería to the east and the Mediterranean to the south. The stretch of coast that borders the province is rather short and is referred to as Costa de Granada or Costa Tropical as defined for the particular climate that allows intensive cultivation of exotic fruit. Its capital is Granada, other major centers are Motril, Almuñécar, Guadix, Loja, Baza

ANDALUSIA: the province of MALAGA 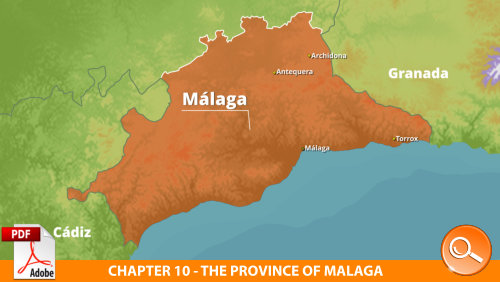 Malaga is a province of the autonomous community of Andalusia, in southern Spain. It borders the provinces of Cadiz to the west and Granada to the east and the Mediterranean to the south. The capital is Malaga, other important centers are Marbella and Vélez-Málaga.

Malaga is the authentic capital of the whole Costa del Sol, with beaches and places that have registered the greatest tourist development in all of Spain over the last thirty years. Unfortunately, the great tourist expansion has prevented the conservation of the territory and has created an havoc of hotels, luxury resorts, amusement parks, discos that make the coast difficult to practice for motorhomers  and fulltimers in free parking. And this is one of the few provinces in which we recommend moving inland even in winter ( if the climate does not become too rigid ) and in this chapter we point out some interesting stops north of the coastal region

ANDALUSIA: the province of CADICE 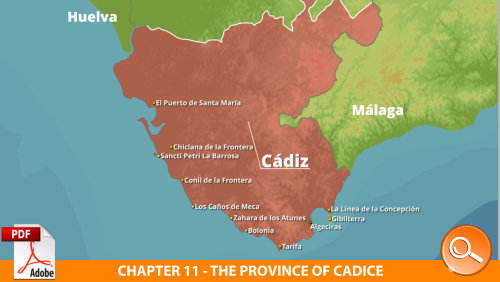 The province of Cadiz is one of the eight provinces of the autonomous community of Andalusia, in southern Spain and its capital is Cadiz. It is located mainly on the Atlantic side of Andalusia and includes the southernmost tip of mainland Spain with the Costa de la Luz.

It borders the provinces of Huelva to the northwest, Seville to the north and Málaga to the east, with the Mediterranean sea, Gibraltar and the Atlantic Ocean to the south. In February, the famous Cadiz carnival takes place, during which a traditional song contest ( chirigota, coros, comparsas, cuartetos ) is organized in the Falla theater. Famous is also the party that follows the streets of the center, and that attracts people from all over Spain. Within the territory is the English colony of Gibraltar

ANDALUSIA: the province of HUELVA 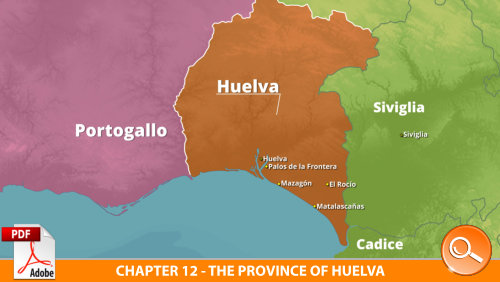 Huelva is a province of the autonomous community of Andalusia, in south-western Spain. It borders with Portugal ( districts of Faro and Beja ) to the west, with Extremadura (province of Badajoz) to the north, with the provinces of Seville to the east, Cadiz to the southeast and with the Atlantic Ocean to the south.

The capital is Huelva, a modern industrial city and port of Andalusia 9 km from the Atlantic Ocean and 50 km from the border with Portugal, on a peninsula called Ribera de la Anicoba. Provincial capital and Episcopal seat, it is characterized by decorated houses of azulejos, polychrome vitrified ceramic tiles, often with azure decoration (azul) from which the name derives, introduced in Spain by the Arabs in the XIII century. Among the most interesting (and not very numerous) stops in this province we remember with a blow to the heart the majestic Doñana Natural Park, an authentic mosaic of landscapes and ecosystems with a unique biodiversity in Europe

“It was the first time we visited Mediterranean Spain, Gibraltar and the Atlantic coast up to the Portuguese border. It’s 30 years that we travel with our motorhome, almost always alone.

This time, however, unlike other trips, it was a radically different experience: thanks to your tracks and suggestions, I have always moved in complete tranquility, sure not to find (unpleasant) surprises and always knowing that I would stop for the night in “certificated” places even if I was alone, practically certain to be in safety” – Livio C.

Any cookies that may not be particularly necessary for the website to function and is used specifically to collect user personal data via analytics, ads, other embedded contents are termed as non-necessary cookies. It is mandatory to procure user consent prior to running these cookies on your website.